The Musicians of Atlassian

One of the great things here at Atlassian is we have some wonderful musicians. Here’s a window into this side of Atlassian life.

Soren Harner runs all our software development. He also runs marathons. Somehow he finds time to be an incredible guitarist and what really pisses me off is he has a voice that makes women rip their clothes off. I have not actually seen women do this. I have, however, seen women consider it. Soren also makes playing music seem so natural and easy. He is one of those guys who knows 325 songs and can start singing one standing on his head. Or perhaps under pressure, with a gun held to his head for example (and with a woman ripping her clothes off). You get the point: this guy is talented.

We have considered shipping Soren MP3s with some of our new product releases, but you know the famous Software Company Problem: not enough time to do all the new feature requests. So his fans must wait. I am one of those fans. 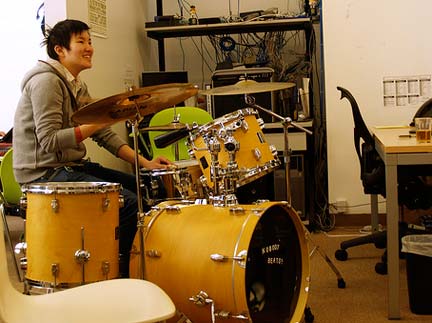 Boots Wang is in Technical Sales and is clearly the coolest musician at Atlassian. Being cool might be easy to do around a bunch of nerdy engineers who clip their nails at their desk in Sydney, but it’s not so easy to do in San Francisco. Boots wears hats you wish you owned. Boots name is even cool. Boots is in bands with cool names: “Nobody Beats” was one. Boots reeks Cool-dom, Coolness, Coolio-Feng-Shui.

To make matters even more cool, she is a drummer. When I went to music school, all the women played flutes or sang arias and danced in the moonlight. They were pussies. Boots, however, throws down. She hits stuff. She is our only drummer, and I bow down to Her Wicked, Bitchin’ Coolness.

Matt Ryall is a Confluence developer and a guitarist. Matt plays acoustic mostly and is the kind of guy who sings folks songs to women to get his way with them. I suspect he is extremely successful. You know: an Emo-kind-of-guy. The kind of guy that writes poems.
Matt is also one of those people who has natural musical abilities. My guess is he never practices. But somehow he whips out some John Mayer song and sounds great. He also lends me his guitar when I am in Sydney, which is terrific of him. Natural software engineer, natural musician.

Jed Wesley-Smith and me

Jed Wesley-Smith is a JIRA developer and a bass player. You non-musicians may not realize how essential it is to have a bass player. I can’t tell you how many bands are searching for bass players. That’s because only weird people play bass. Bass players are famous for lacking social skills. The bass is the Supreme Understated Instrument. It’s takes a certain Zen quality. Type-A, ADD, Hyper-active people like me cannot play bass. Mellow Dudes play bass, and Jed is an extremely mellow guy.
Jed is also a phenomenal musican. While some of us have played professionally, Jed has played concerts where people scream and dance until they have heart attacks or over-dose on something. Jed is also one of those rare white guys who can spell FUNK. Jed is a seriously funky player. Playing music with Jed is a pure joy.

Taras Naumenko is on the Customer Service team in San Francisco. He’s in another league from the rest of us musicians because he not only went to music school, but he plays Classical guitar. The rest of play music to drink by. Taras plays serious shit. Taras, however, is full of surprises.
One day we were jamming in the office, and Taras starts playing “Californication” by the Red Hot Chili Peppers. Now I bet Yo-Yo Ma never played that. How many classical musicians play music from a band that shoots heroin? Anyway, Taras taught it to me, so he’s a real Stand-up Guy. 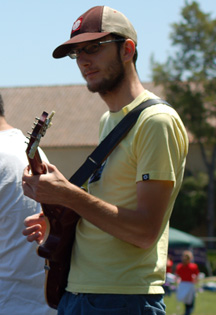 Morgan Friberg is on our marketing team in S.F. and is the one Real Professional musician in the company. Morgan gigs regularly. In fact, his band, Arcadio has a website, they record regularly, and they even have Arcadio beer cozies, for Godssake. Morgan also plays multiple instruments: guitar, mandolin, ukele, and I suspect more.
Some day I’m going to come to work, and Morgan won’t be there because he was discovered and he hit the Big Time. I will buy every CD. I will even jump in the mosh pit.
Most of us Atlassian musicians are mere mortals. Then there is Jay Simons. Jay runs our marketing. He runs marathons. He does triathalons. He races in serious bike races for laughs. Jay does everything Full-Tilt. He is a spectacular piano player and has an incredible voice. In Jay’s case I am certain women rip their clothes off when he sings. Men might, for that matter. Jay is so talented, his dog is talented. Jay is also very funny and almost as funny as me. 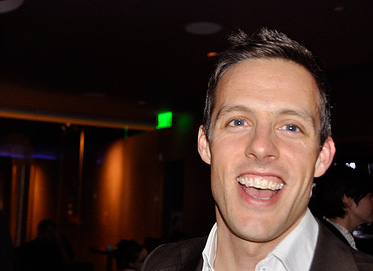 If software ceased to exist as a profession, some of us could go be professional musicians. But we would be end up playing in bars where people drink too much and have fights. Jay, on the other hand, would be playing cocktail piano at the fanciest hotel in town, dressed in a tuxedo, sipping a martini while women ripped their clothes off. Jay is Pro all the way.

For those musicians out there with some Software Chops, you might want to someday consider joining Atlassian. We need a bass player in S.F. badly, a drummer in Sydney, horn players, perhaps a great conga player… Oh, you get the point.